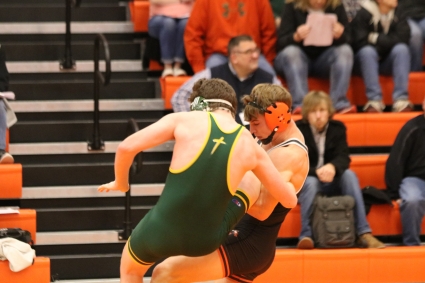 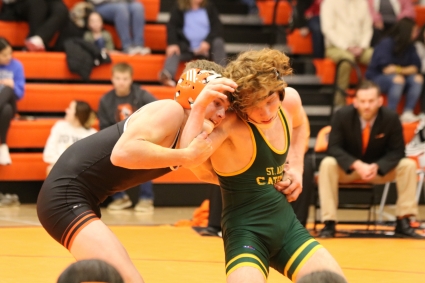 Red Oak wrestler Dawson Bond highlighted the week with two wins over state ranked wrestlers, the second one in front of the home crowd, and an eighth-place finish at the Kansas City Stampede over the weekend.

“We often discuss how we seek out tough competition and sometimes it reflects in our early season records,” Red Oak head wrestling coach Tiegen Podliska said. “Tonight showed that as we showed a lot of improvement picking up two wins and a competitive loss.

“Logan-Magnolia is currently ranked fifth in Class 1A in state duals, and this is the closest we’ve wrestled them since having them join this dual a few years aog,” Podliska said.

Bond’s win was over the number two wrestler in Class 1A, one of the highlights for the night.Red Oak

The Tigers hosted a quad on Thursday, Dec. 16, for Educator Appreciation Night, which included teams from St. Albert, Denison, and AHSTW. The Tigers went 2-1 on the night as a team.

“First off, I have to thank the crowd,” Podliska said. “The environment was electric and helped us raise the level of our wrestling. It was a good night. We’re improving, and the boys and girls are really buying in to what we preach.”

The Red Oak Tigers traveled to Kansas City to compete in the Kansas City Stampede on Friday and Saturday, Dec. 17-18.

“You find out a lot about your team at a tournament like this,” Podliska said. “Day two is always interesting because you get to see how the individuals you lost matches to fare. We lost to the champion in two brackets and a finalist in another, and a lot of place-winners. We had individuals knock off seeded wrestlers and several beat former state qualifiers and place-winners.”

Two Tigers advanced to the gold bracket on the boys side for the final day of wrestling: D. Bond and K. Sandholm.

D. Bond finished in eighth place, losing to the champion in his first match, and winning the next five matches to earn eighth place. He finished the tournament 5-3 with one technical fall and four decisions.

K. Sandholm finished 2-2 with one fall and one decision, but did not place in the gold bracket.

Josie McCunn finished the tournament 1-2 with one decision and did not place.

The Tiger boys finished 25th out of 54 teams in the second chance brackets on Saturday, with 70 points.

Red Oak wrestling will be back in action after the Christmas break.