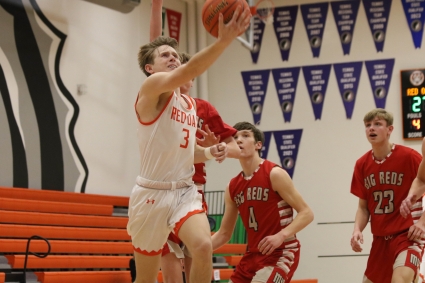 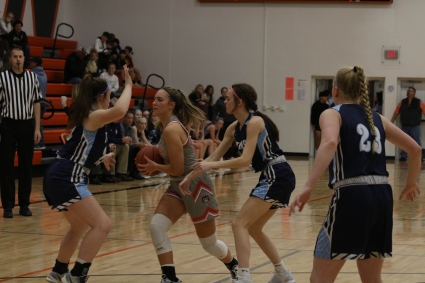 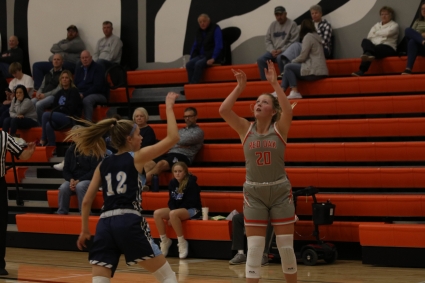 The Red Oak boys advanced to the Class 2A substate 8 quarterfinal after defeating Missouri Valley 65-39 on Monday, Feb. 14.

The Tigers built an early nine-point lead and led by 16 at the halftime. Missouir Valley played tough in the third quarter, only being outscored by one point. However, Red Oak extended the lead in the fourth quarter by as many as 29 points before the eventual win.

“We knew this would be a game where we needed to pick up the pace of play, and I was proud of our guys for doing just that,” Red Oak head boys basketball coach Spencer Plank said. “Monday night games are sometimes hard to get mentally prepared for, but we played hard and are turning our attention to Thursday.”

The Timberwolves had two players finish in double-digit scoring, led by Gabe Fuller with 20 points.

Red Oak girls held a 17-6 lead after the first period of play and held a 26-23 lead at the break. But the Timberwolves rallied in the second half for the 52-40 win.

“We are playing our best basketball of the year down the stretch,” Southwest Valley head girls basketball coach Mike Cormack said. “I am glad that we could win our last two home games for our seniors. This was not an easy game, as we ended the first quarter down double figures. Credit to Red Oak for coming and fighting for this game. I am proud we fought back, by locking down and building up our intensity.”

Red Oak girls finished the regular season 0-21, and began post season play on Saturday, Feb. 12, in Des Moines, as they took on Des Moines Christian (15-6) in Class 3A region 7 first round action, falling 66-21.

The Red Oak girls, led by Ramirez, came out playing tough with Ramirez scoring the first eight points for the Tigers. At the end of the first quarter the score was 13-8, with the Thunder leading.

“The girls played a tough man defense, but struggled finishing small shots at the hoop,” Red Oak head girls basketball coach Cliff Owen said. “But the Tigers went on a cold streak, finishing out the half down 38-12. The girls kept fighting ’til the end.”

“This was a very tough year for the Tiger girls, and we want to say thanks to Lennon O’Neal and Payten Bass for being seniors who came out and finished the season with the girls,” Owen said. “We have a lot to look forward to next year with three sophomore girls who will be returning, and it is a team they can build off of. With a new coach, only good things can happen next year for the Tiger basketball program.”

Mount Ayr took an early lead and never trailed in the game, going into halftime with a 34-22 lead. Red Oak tied the game up at 45 early in the fourth quarter, but Mount Ayr responded with a run of their own to eventually win.