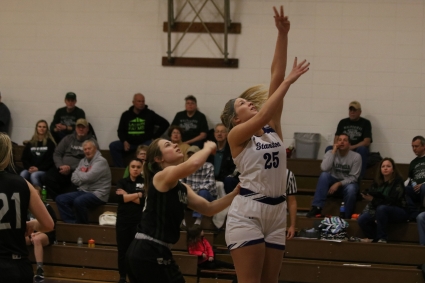 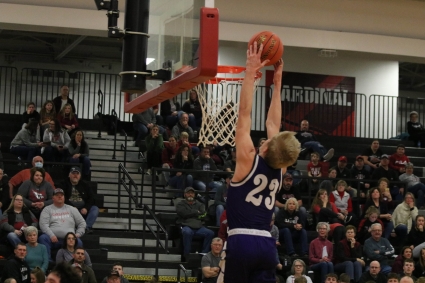 The Stanton Viqueens kept their undefeated season alive in a 67-64 overtime victory over Lenox on Monday, Feb. 8, at home.

The Queens got off to a slow start as Jenna Stephens scored all nine of Stanton’s first-quarter points on her way to a career-high and school record of 41 points in a single game.

“We set goals for every game and a big part of our game is defense, with our goal being 35 or less points allowed,” Stanton head girls basketball coach Dave Snyder said. “By half the idea of holding Lenox to that goal was pretty well exhausted with the Queens hanging on to a 26-24 half-time lead.”

The first period ended with Lenox leading 15-9. The Queens finally started making their shots in the second period, heading into the break with a 26-24 lead.

“It was very apparent that our ability to score points was going to play a major factor in us winning this game,” Snyder said. “It came down to us making runs and countering any Lenox scoring run.”

The third period ended with the Queens maintaining a two-point lead, and they pulled ahead by eight mid-way through the final period, but the Tigers rallied and finished the period on a 7-0 run to knot the score at 54 and take the game into overtime.

Lenox scored the first points in the OT and battled to a 64-60 lead with 30 seconds remaining. Stephens added two points and Leah Sandin chipped in another bucket to knot the score at 64. With three seconds remaining, Stanton forced a turnover and Marleigh Johnson in-bounded the ball where the Queens passed to Stephens for the deep three-pointer at the buzzer.

“The play was set up to go to Jenna,” Snyder said. “The girls did a great job of improvising for what Lenox’s defense gave us, and she made the play.”

“The thought of breaking the school record had never crossed my mind,” Stephens said. “I didn’t think going into that game that I would finish the night with 41 points because usually we are a pretty even scoring team. When it came to the game, I had to do what the game called for and I knew I had to step up and be the scorer if no one else could. After that last shot left my hand, I knew it was going in. It felt amazing to make the shot and be able to pull through for my team. This whole team deserved that win and deserves to have the reward of an undefeated season.”

Stephens finished with a double-double, recording 10 rebounds as well as three assists, one steal, and one block.

The Vikings pulled away early in the second quarter and never looked back in the 55-41 win over Lenox for the sweep.

Highlights of the game included a sweet dunk by Carter Johnson and a monster block by Nolan Grebin.

Johnson flirted with a triple-double, finishing with 16 points, nine rebounds, nine assists, and recorded two steals and one block.

The Viqueens began post season play with a home game against Orient-Macksburg on Thursday, Feb. 10, earning a 62-22 win and advancing to quarterfinal action on Tuesday, Feb. 15, as they host Fremont-Mills.

The Queens used a 27-4 first quarter run to cruise to the victory, with every member on the team getting good, quality minutes of play. Sandin led the scoring, finishing with 14 points, all from the first half.

The Vikings finished regular season action with a non-conference match-up in Clarinda on Friday, Feb. 11, falling to the Cardinals 55-48.

Stanton started hot, grabbing the first four points before the Cardinals went on a 16-4 run to end the first quarter leading 16-6. The Vikes stormed back in the second period and headed into the break down 23-22. The Cardinals held a two-point lead at the end of the third quarter and extended that lead to 10 midway through the fourth quarter. But the Vikings never gave up. With just under three minutes to play, Stanton’s Grebin drained a trey and Johnson nabbed the ball and planted a dunk to give the Vikes momentum. Grebin added five more points before the Cardinals used the stall tactic to force fouls and pull away at the line for the win.

“You seriously can’t ever count theses guys out,” Lord said. “They battled all game against a solid 2A school and had it within three points with under a minute left. We finished regular season and haven’t peaked.”

The Vikings hosted Lenox in Class 1A substate 7 action on Monday, Feb. 14, advancing in the post season with a 55-46 win.