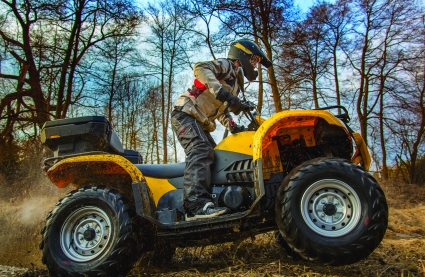 Montgomery County is moving forward with a resolution setting inspection fees for off-highway vehicles, or OHVs, including all-terrain vehicles, off-road motorcycles, and off-road utility vehicles, as well as water vessels, travel trailers, and cargo trailers.
The Montgomery County Sheriff’s Office proposed an additional fee for the inspection of those vehicles in the amount of $20, for the time and expense involved in inspecting and confirming if the vehicle was previously registered or entered as stolen.
Montgomery County Sheriff Jon Spunaugle was in attendance at the supervisors meeting June 14. Spunaugle said the fee was being proposed due to the law awaiting a signature from Iowa Gov. Kim Reynolds that would allow for ATV and UTV usage on county and state highways.
“We already inspect these vehicles now, but with the new law, I’m expecting we’re going to be flooded with requests.  Right now, we can do about 20 inspections over the summer, but I expect that will highly increase,” Spunagle said.
He added, there are many of these types of vehicles that would all require an inspection prior to road use.
“There are utility vehicles all over that have no titles, and the owners have to get a form, and bring it back, and it has to be reviewed by a deputy. We’ve never charged for this before, but in the wake of the changes, I kind of feel this is something we need to do, and it’s already our time in expense to do it right now.”
Spunaugle added it would be a one-time fee.  Also, the fee involves an inspection for a vehicle that has never been titled or registered in the State of Iowa.
“In order to be eligible for road use, the vehicles have to be registered, and there are many of these types of vehicles that are for farm use that currently have never been registered,” commented Spunaugle.
Spunaugle stated that the fee was largely in place for utility vehicles that had seen multiple owners prior to being inspected.
“It’s like when a four-wheeler is bought by someone who sells it to someone else, and the next thing you know, it’s 15 people down the line and no one has registered the thing. With this new law coming into effect, if they want to get it registered to drive it on the road, it has to be inspected. For anyone who buys a brand-new one, or has a valid title, there’s no need for an inspection.”
The supervisors approved the resolution setting a $20 fee for inspection services by the Montgomery County Sheriff’s Office.
In other business, the supervisors:
• Accepted a letter of resignation from general assistance director Sonia Jackson.
• Approved the recorder’s report of fees for May, in the amount of $23,783.
• Approved the treasurer’s ending fund balance for May, in the amount of $11,250,
• Approved a tax transfer from General Basic to Secondary Roads, in the amount of $649.