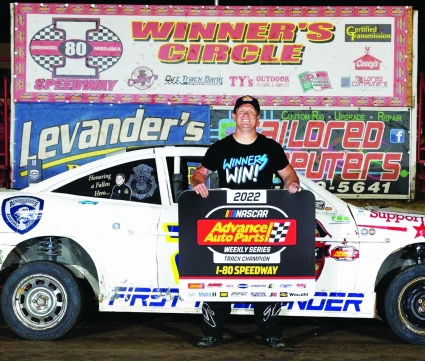 Racing for the First Responders Foundation, Red Oak native Adam Smith recently won the 2022 NASCAR/Advance Auto Parts Weekly Series Track Championship at I-80 Speedway. Smith said his passion for racing started at an early age, fueled by his neighbors Rick and Carrie Weston, who raced weekly at Adams County Speedway.
“Carrie would work on the car during the week, while Rick was over the road trucking and then when he came home they would load up and go racing. I became very good friends with their son Jerod.  Jerod, myself and the rest of the neighborhood kids would race our bikes in the street in front of their house for hours,” recalled Smith. “My father, Reid Smith, made us wooden blocks with our favorite race car driver’s numbers on them and we attached them to the handlebars of our bicycles.”
The Smith family would also often attend the races, but as Adam got older he became too busy with athletics to attend and although he always had a love for dirt track racing, it fell by the wayside, especially after he started his career in law enforcement.
In 2010, Smith raced a hobby stock car at the Adams County Speedway, but commented it was a “short lived adventure. In 2018, he started figure 8 car racing with Chris Bozwell and Steven Biggerstaff.
In 2019 Jim Cahill, the leader of the First Responders Foundation Race Team, was hosting an event called the Guns & Hoses Race, where police officers race firefighters at intermission at the I-80 Speedway. The event, Smith said, was to recognize the First Responders Foundation in Omaha and all First Responders including police, fire, paramedics, dispatch, and the military.
“I won the event in 2018 and was asked to come back in 2019.  In 2019 I won the event again and Jim said, “I think you could run with the weekly drivers.”  Jim offered for me to drive a spare car he had for the rest of the season. I drove and did fairly well.  At the end of the season he said lets do it again, but add a firefighter to the team, so in 2021 we added Brad Lucas an Omaha firefighter, to our team.  Last season I finished third in points,” Smith said. “This season we added yet another member to our team.  Her name is Melissa Latture and she is in the U.S. Military. Our team is the First Responders Foundation Race Team and we are racing to get the word out about the First Responders Foundation, whose mission is to serve and honor all our first responders, veterans, and their families, build appreciation and respect for their work, and enhance public safety.”
Smith explained the 2022 season at the I-80 Speedway in Greenwood, Neb., began in April. Overall, he won three “A” Features and had six top five finishes and two top 10 finishes. He added, points are given every night based on a driver’s finish in the “A” Feature.  Smith finished the season with 923 points, with the second place finisher, Bryan Vannausdle, right behind him with 921 points.
When asked what gives him an edge driving, Smith said being diligent in the maintenance of the car is very important and well as being patient behind the wheel.
“Being patient and not forcing your way through the field of cars while racing is what gave me all the consistent finishes.  Also, just being a student of the sport learning how to drive on the different track conditions, learning how to have finesse on throttle and how to set the car into the corners lead to me to finishing on top this season.”
A 2003 graduate of Red Oak High School and a member of the Red Oak Police Department since 2008, Smith said he owes much of his success to his wife, Abbey.
“My wife is the actual champion in all of this, and I owe her greatly for all my success in everything I have done and everything my children have done,” Smith said. “She keeps all of us moving and on schedule and on top of it all she is always our biggest fan.  We strive as a family to be very dedicated and give 100% in everything we do.  Time gets hectic, but it’s a mindset and if you want to be good or great at anything you have to do the right things and put in the work when no one is looking, learn from your mistakes, don’t be afraid to take risks or fail and be grateful for all the opportunities you are given.”
In addition to Abbey, Adam said he wouldn’t be successful on or off the track if it weren’t for the support of his children, Aspen, Aiden and Abel, his family, friends and co-workers. He also is very appreciate of Jim Cahill, who gave him the opportunity to race on the First Responders Foundation Race Team, his sponsors, Ultimate Truck Off Road Center in Omaha, Paul Davis Restoration in Omaha, Penthouse Lounge, Joshua Medical Center and Armored Knights Security and many others.