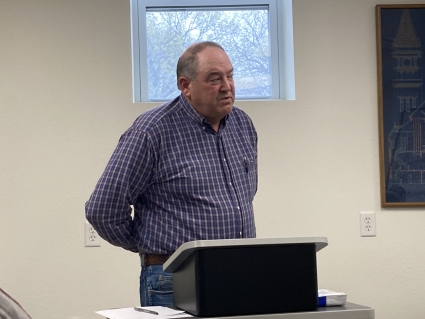 After lengthy discussions, the Montgomery County Board of Supervisors voted against reclassifying a portion of 230th Street in East Township, west of V Avenue, as a Level C Road.
Prior to the vote at the May 3 supervisors meeting, a public hearing took place. Two letters were received. The first, signed by 24 people, urged the supervisors to vote against reclassifying the road as a Level C.
A second letter was received by Christopher and Leanna Frede. While they are not adjacent property owners to the road in question, they own property close to the area and stated that they were in favor of the road reclassification, due to the large increase in traffic by non-residents and non-property owners.
“We’ve noticed a large portion of the travelers go by at all times of the day and night, and at above the speed limit or at unsafe speeds. There has not been an accident yet, but there will be. There are three blind hills, and I have personally stopped a carload of young adults trying to jump the hill at our driveway. My wife and I also have concerns about meeting non-resident traffic,” Frede said.
The supervisors then heard oral comments from residents for and against the reclassification. Gordon McAlpin said he lived about a mile and a half from the road, and used it often, as it was the most direct route from Hacklebarney to Villisca.
“That road is used quite a bit, and I think that’s enough of an excuse to leave that road open. I know Eric Anderson has spent a lot of money on that road, but I’m sure the engineer’s office and the taxpayers have spent money to upgrade that part of the road. Most of the people on that first petition live in that area and use that road,” McAlpin said.
Adjacent property owner Eric Anderson was next to speak, and said he was in favor of making the road a Level C for a number of reasons, including safety.
“I’d like to see it closed because there’s a lot of blind driveways and hills, and recently, there was someone who got stuck in the mud and made a mess of it, which will require it to be graded and cleaned. I’ve paid a lot of money for rock to be hauled, and for construction on the road,” commented Anderson.
County engineer Karen Albert confirmed that the cost of the gravel and the hauling, as well as the grading on the graveled portion of the road was paid for by Anderson, and the county did some grading, but it was very minimal, and all the work the county did was compensated by Anderson.
Kyle Yates addressed the supervisors next, and said he lives a half mile from the road in question, and he was against reclassifying the road as a Level C. Yates said there were a lot of dirt roads in the county, and there were a lot of people that made poor decisions in going down dirt roads.
“My question is, are you going to close all of them, or just this one? Yes, we did have someone get stuck recently, and we probably will have someone get stuck the next time it rains. I’ll bet that there’s not a dirt road in the county that someone hasn’t gotten stuck on,” advised Yates. “To me, this is a drumbeat by a new landowner that wants a private lane to his 40 acres. That road has been there a long time, and there’s no reason to close it. People are going to do stupid things, and they’re going to do them all over the county. The vast majority of people are smart enough to know when they can go down that road, and when they can’t. I’ll concede that it probably gets more traffic than other dirt roads just based on proximity.”
Pat Victor spoke in favor of the road being classified as a Level C, and said she’s been in favor of it for decades. Victor said the road would not be closed off completely.
“We’re going to have two gates for people to come through. It’s not a private driveway. We know it affects people, but all they have to do is call us and we’ll let them through,” Victor stated.
The final two residents to speak were Craig Archer and John Clark. Both were in favor of the supervisors approving the change to a Level C road.
Supervisor Donna Robinson said she had received a number of phone calls regarding the road reclassification, and all of the calls urged her to vote against it.
I’m sure there are going to be people that go out and tear it up when it’s muddy, but there are a lot more people that are going to use it the right way when it’s not muddy,” Robinson said.
Supervisor Mike Olson said he felt it was the supervisors’ role to respect the rights of the landowners who lived on the road or near it.
“Pretty much everyone that has signed off on that has said they are in favor of closing the road. I also feel we need to respect what Mr. Anderson did financially to bring that road up to code. It’s probably a good back way to get from Hacklebarney to Villisca, but I’m not sure it’s a total necessity for the viability of the eastern part of the county,” advised Olson.
The resolution failed by a 3-1 vote, with Olson being the only supervisor in favor of passing the resolution. Supervisors Chair Mark Peterson abstained from voting.