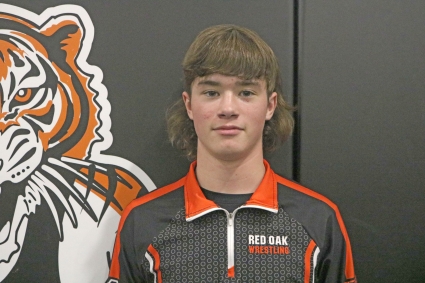 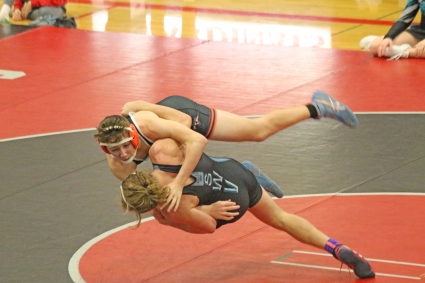 Red Oak senior wrestler Chase Sandholm celebrated his 18th birthday earning his 100th, 101st, and 102nd win Thursday, Jan. 6, in Glenwood as he went 3-0 on the night, highlighting the Tigers week, which began with a Tuesday quad in Clarinda.

The Red Oak Tigers went 2-1 on Tuesday, Jan. 4, their first night back on the mats from a two week break.

“We went 11-8 in contested matches on the night, and we were a little shorthanded, but I thought our kids did a good job competing,” Red Oak head wrestling coach Tiegen Podliska said. “We know we score a lot of bonus point wins; we need to keep working on limiting our losses by bonus points.”

Dawson Bond, Joshua LeRette, Chase Sandholm, and Kyler Sandholm were all 3-0 on the night.

“We had a pretty good night,” SWV head wrestling coach Cody Konence said. “We hung in pretty well with Clarinda, but we knew we proably wouldn’t have enough fire power to take them down. We were down two wrestlers which made it hard to overcome the numbers Red Oak had. We did put a pretty good dual together against St. Albert. All in all, we were hoping for two wins, but we were happy to stay competitive in the ones we lost.”

The Tigers traveled to Glenwood on Thursday, Jan. 6, for a double dual with the host school, Lewis Central, and Shenandoah. The Tigers finished the quad 2-1, narrowly escaping Shenandoah, fighting for the two-point win.

“We were missing a few pieces tonight,” Podliska said. “At the beginning of the night, we talked about adversity; it’s one of the things that we preach about our sport teaching. It prepares you for life. We were out a couple starters today, and that’s adversity, but we controlled what we could control and came away with two more dual wins.”

The Tigers competed in the Rollin Dyer Tournament in Atlantic on Saturday, Jan. 8, with 15 other teams, finishing the day in 12th place.

“We placed right around where we thought we would,” Podliska said. “I thought the kids competed hard. This tournament is getting tougher and tougher. We’ve got a young group and we’re excited about the future.