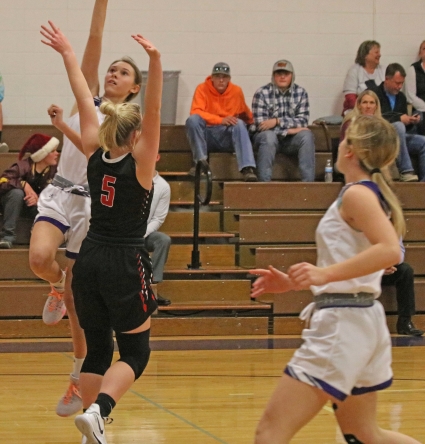 The first quarter was a back-and-forth battle that ended with Stanton ahead by three points. The Queens outscored the Wheelers 16-2 in the second quarter to head into the half time with a 27-10 lead. Although Audubon rallied in the third quarter, outscoring the Queens 21-16, it was not enough and Stanton put the game away early in the fourth.

“I feel we have a very unselfish squad that cares more about winning than personal accolades,” Stanton head girls basketball coach Dave Snyder said. “The games scheduled came about due to a team dropping us just before the season this year, and us losing conference teams which has created a much more challenging schedule.”

Jenna Stephens added another double-double on the season with 15 points, 14 rebounds.

Stanton traveled to Avoca on Thursday, Jan. 6, and defeated the 4-5 Vikings 57-42 with a well balanced shooting attack, led by Sandin, who finished the night with a career-high 20 points.

“The way teams elect to defend us dictates as to who gets more opportunities to score,” Snyder said. “Lately, Leah [Sandin] has had those opportunities and has stepped up to the challenge quite well.”

The Queens took control early in the game and the Lady Vikes could not erase the 18-7 point difference from the first quarter.

The Queens are back in action tonight as they host Sidney beginning at 6 p.m. with the boys game to follow.