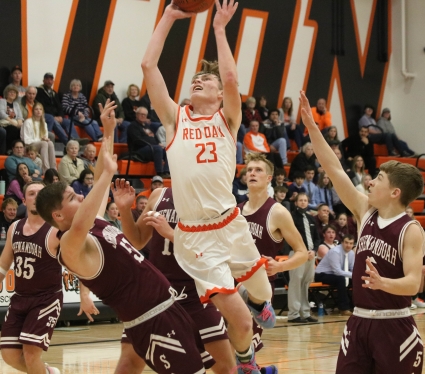 The Red Oak Tigers split wins with Shenandoah on Tuesday, Dec. 7, as the girls fell to the Fillies and the boys routed the Mustangs.

In girls action, the Tigers fell 50-13, as the Tigers struggled with the Filly defense.

The Tiger boys defeated the Mustangs 66-41, behind 25 points from Max DeVries and 13 points, eight rebounds from Bradley Sifford.

“We played with a lot of effort and intensity, which I was proud to see,” Red Oak head boys basketball coach Spencer Plank said. “We struggled to execute in the halfcourt, but that’s something we can work on as the year progresses. We want to peak in early February, so we have some time to iron out the details. The effort should never leave though, and tonight we definitely showed it throughout most of the game.”

The Tigers game with Keumper scheduled for Friday, Dec. 10, was postponed to Monday, Dec. 13 due to the inclement weather.

Red Oak hosts Harlan on Friday, Dec. 17, in a girls and boys conference double-header beginning with the girls game at 6 p.m.