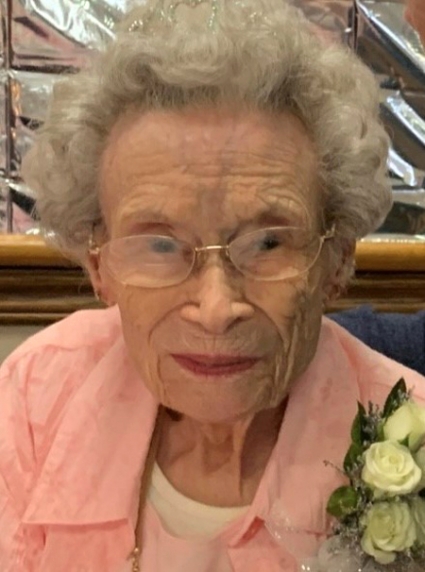 Esther Mae Gotberg, 102, Red Oak, passed away, Sunday, Nov. 13, 2022, at the Montgomery County Memorial Hospital.
Esther Mae was born Jan. 3, 1920, in Montgomery County, the daughter of Veimar and Mary Anna (Dukeshier) Johnson. She graduated from Coburg High School in 1938, received her teaching certificate from Red Oak Junior College, and graduated from North Park College in Wheaton, Ill.
Esther Mae was united in marriage to Eugene Montgomery in 1944, and he was killed in action during World War II. She taught country school for five years before moving to Boston, where she worked for Covenant churches until 1960 when she moved to Michigan, working for Covenant churches in Detroit and Farmington Hills for many years.
She was united in marriage to Carl Axel Gotberg in 1978. Esther Mae moved back to Red Oak in 1994 after Carl had passed away the prior year. She was very artistic and enjoyed painting. She was a faith-filled woman who read her Bible through every year since she was the age of 20. She was a longtime member of the Covenant Church where she served the Lord in many capacities throughout the years. Most recently, Esther Mae was a member of the First Covenant Church in Red Oak.
Preceding her in death were her parents; husbands, Eugene and Carl; and siblings, Loleta Udd, Lester Johnson, and Nina Eckstrom.
Survivors include her sister-in-law, Joan Johnson of Red Oak, many nieces, nephews, and other relatives and friends.
Funeral services were held Saturday, Nov. 19, 2022, at the First Covenant Church. Burial will be in the Evergreen Cemetery in Red Oak. Visitation with the family will be held one hour prior to the funeral at the church.
Nelson-Boylan-LeRette Funeral Chapel is in charge of arrangements.