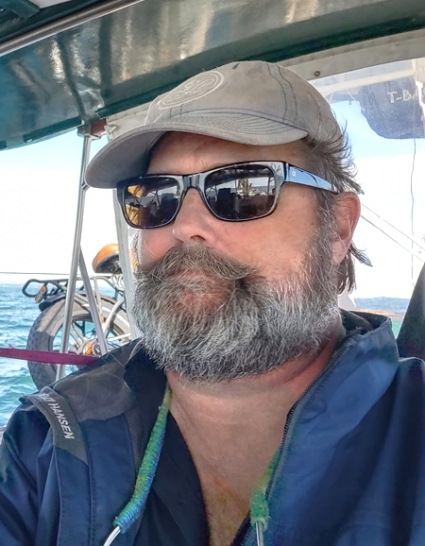 Brian J. Bowman, 57, rural Red Oak, passed away on Monday, Oct. 31, 2022, at Nebraska Medicine, Omaha, Neb.
Brian James Bowman, the son of Robert Lee Bowman and Susan (Kelker) Stegenga, was born April 7, 1965, in Red Oak. Brian was raised on the family farm in the Nyman area and spent his summers in Okoboji, where he developed his love for water skiing and sailing. He graduated from Essex High School and then studied at Iowa State University. Brian was married to his beloved wife, Melinda Kay (Marks), for 31 years. Over a number of years, they traveled and settled in many different places, experiencing the riches each place had to offer.
Brian took on several different careers, excelling at each of them. He was truly a jack-of-all-trades and a “master of the sale,” as he would say. One of his personal achievements he was most proud of was a remolding of the Deco Hotel in Omaha that won several awards and was featured in several publications. In 2017, Brian and Melinda moved back to the family farm at Nyman to help to take care of his ailing grandmother, Rena.
Brian was diagnosed with lung cancer in 2017 that he fought bravely and with a sense of peace and harmony and positivity that not only helped him to beat the lung cancer but to go into remission. His fight and the way in which he did so inspired so many people that he encountered during and after that time. In 2021, Brian and Melinda purchased a 44-foot sailboat named Chanticleer, fulfilling a lifelong dream of being able to sail the open ocean. Brian and Melinda as well as family sailed up the east coast from Vero Beach, Florida, to Maine and back. He loved music, cooking, farm life, traveling, sailing, but most of all his family and friends and the adventures they shared.
Brian was preceded in death by his father, Robert Lee Bowman; son, Cullen Drake Bowman; and both sets of grandparents.
Brian is survived by his wife, Melinda Bowman of rural Red Oak; son, Eric (Michelle) Higgins of Grand Junction; daughters, Jessica Bowman of Omaha, Neb.; and Brianna Bowman of Red Oak; three grandchildren, Megan, Martin and Robert; mother, Susan (Stu) Stegenga of Vero Beach, Fla.; sister, Jennifer Reavis of Vero Beach, Fla.; cousins, other relatives, along with many friends.
May God bless his memory and give strength to those who mourn.
Celebration of Life Service will be held Saturday, Dec. 3, 2022, at 10:30 a.m. at Fremont Lutheran Church at Nyman. Burial of cremains will be in the Mt. Hope Cemetery.
Memorials are suggested to the American Cancer Society. Remembrances and condolences may be shared with the family at sldfuneralhome.com.
Sellergren-Lindell-DeMarce Funeral Home is in charge of Brian’s arrangements.