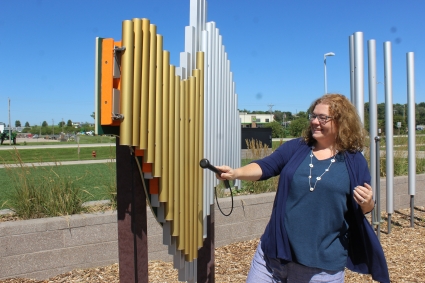 A new and free outlet for musicians young and old has been unveiled at the Wilson Performing Arts Center.
In late August, a special ribbon cutting event was held for the WPAC’s new music garden, featuring multiple drum and tube instruments to play. The project was brought to the finish line by new executive director Valerie Zane, who said she’s settling into her new role quite nicely.
“I’m having a lot of fun, quite honestly. It’s a lot to do, and a lot to learn, and there are a lot of people to meet, but everyone has been great. The staff here, and the volunteers and the community have been so warm and welcoming, and that’s been awesome,” Zane said.
While Zane said she coordinated the ribbon cutting for the new music garden, she said that the project itself was the brainchild of former executive director Kara Sherman.
“Sherman worked on it for several years and pulled together some grants and donations and community support to make it happen. All the instruments were donated from the City of Red Oak, the Red Oak Rotary Club, the Brower family, and the Montgomery County Community Foundation,” stated Zane.
Sherman was present for the ribbon cutting on Aug. 24. Zane said she felt it was very important for Sherman to be there.
“It was her baby, and she really worked hard on getting this to come together. While I’m sure others did too, this was really a heart project from Kara, and we wanted her to be there. It wouldn’t have been fair for me to cut the ribbon on something that she worked so hard on. She’s really proud of that garden, and she should be,” Zane said.
Sherman loved working with kids and having events that catered to children, and the music garden will provide extra entertainment for the kids and adults.
“Even when we’re closed, kids and come here and do things. Also, it’s not just the kids. I see adults out there regularly playing on the drums and the other instruments, so it’s something for kids and kids at heart. I think that was her drive in getting the project put together, her love of children, and having something else in the community for kids to play on.”
Zane believes this may be the only outdoor music garden that can be found in the Southwest Iowa area.
“I believe Kara mentioned there may be one other place with a music garden, but I don’t remember where that was. For us, this is a huge deal, and I definitely haven’t seen another in Red Oak and the surrounding communities. If there are more, or more are built, maybe we can do some sort of jam session from our music garden to theirs,” Zane commented.
Zane added they plan on adding a few new features to the existing garden in the near future.
“We have a grant that allows us to get picnic tables out there, so we’re going to put those out. And we’re also going to look for a grant to get some shade coverage, because it gets hot here in the summer, and it would be literally cool to be able to go out there and have that kind of coverage from the sun,” said Zane. “I’m also hoping that we can  eventually do some events out there, like public shows, or some of our kids camps. I want to do more kids camps, and I would love to have that be a focus for some of our camps. It’s great to be inside the building, but it’s better to be outside on a summer day. In all sorts of weather instances, it would help with them.”
Zane said if anyone wishes to donate instruments or can help the WPAC to bring more instruments to the garden, they have plenty of space for more. Anyone interested can call Zane at 623-3135 to make a donation.
While the garden has only been open for a couple of weeks, Zane said the response has been overwhelmingly positive.
“Everyone has really loved it. It goes back to that kid at heart thing. Sometimes I can see the people out there playing on it. There was an older gentleman out there the other day who was having a total jam session. Everyone just looks happy out there, and it was good to see people out there chilling and having fun together. Whether or not you know how to play, it’s fun,” Zane explained.
The music garden is open 24 hours a day, seven days a week, and Zane said she hopes people continue to enjoy it.
“I hope it sparks foot traffic here, but even if they only come to the music garden, that will be awesome. I hope it sparks people’s interest in music, their happiness, and allow them to have a good time. And if someone comes to a show, and wants to go outside and play with the music garden, that’s cool too,” Zane stated.
Without community support, Zane said the music garden would have been an impossible project.
“The Red Oak community and Southwest Iowa keeps this place alive. I literally wouldn’t be here without their support. In the case of the music garden, it was their love and passion for the arts that keeps this place going,” Zane said.
Zane expressed her appreciation to everyone that has not only supported the music garden, but who has supported the WPAC and Zane herself as she settles into her new position.