Supervisors to serve as co-applicant on trail grant 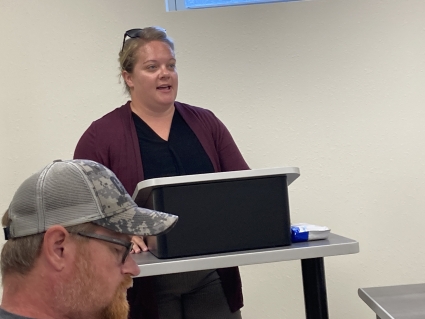 The Montgomery County Board of Supervisors has agreed to serve as a co-applicant on a Destination Iowa Application, in partnership with the City of Stanton.
Stanton Community Development director Jenna Ramsey spoke before the supervisors at the Oct. 11 meeting. The Destination Iowa Application would assist in phases one and three of a proposed trail plan, out to Viking Lake State Park.
“I’ve been involved with the plan for about three years now, and the goal has always been to construct a trail from Stanton to Viking Lake, as well as improve trails in Montgomery County, which will allow trails to be improved throughout Southwest Iowa,” said Ramsey.
Besides phase three of the project from Stanton to Viking Lake, the first phase of the trails project is on the east side of Stanton, in the technology park area, and the second phase is at Anderson Park. Ramsey said the second phase was nearing completion.
“We have awarded a bid for phase two of the trails project, and it should be done sometime this fall. We’re still looking for funding for phases one and three, and we are looking for ways to finish out these remaining two phases,” commented Ramsey.
Destination Iowa is a $100 million dollar program that is given to projects that create tourism throughout Iowa. Ramsey said they’ve spent the past five months working on creating an appropriate draft application to submit for funding.
“After doing a few different drafts of applications and receiving feedback, we were told that since phase one of the project is owned by the City of Stanton, and  phase three is with Montgomery County, if you and the City of Stanton are co-applicants with us, it will greatly strengthen the appeal of the application,” advised Ramsey.
While there is a required funding match to be considered for the Destination Iowa grant, Ramsey said that match was taken care of.
“We are able to use the funds we’ve raised so far on phases one and two of the project for the matching funds on the application, so I am not asking for additional money, I’m only requesting the support of the county to be a co-applicant, and the money from Destination Iowa will allow us to finish phases one and three of the trail project,” Ramsey said.
The Stanton City Council has already approved being a co-applicant, so if approved by the supervisors, the county would join the city of Stanton and the Stanton Community Foundation as co-applicants.
Ramsey added if the Destination Iowa funds were awarded, she was hopeful the supervisors would direct the county engineer or another entity to assist in figuring out the best plan for phase three.
“We have the quotes and the costs, but we’d like to have a partnership and work together to make sure everybody is happy. Also, we’ve reached out to other Destination Iowa funds, and some are choosing to manage to the grant on their own, and some are having them managed,” said Ramsey. “I’ve approached the Southwest Iowa Planning Council what it would cost for them to manage this, and they told me it would be $10,000. I am envisioning another partnership on establishing SWIPCO to manage this. I think the best course of action we can take to make sure this is successfully done is to have someone manage it.”
The entire cost of the trails project is roughly $2.5 million. Ramsey said they are requesting $1 million in funds from Destination Iowa.  Ramsey said if the funds are awarded, she may seek some funding to cover the costs of having SWIPCO manage the funding.
The supervisors unanimously approved the request from Ramsey to be a co-applicant on the Destination Iowa application.