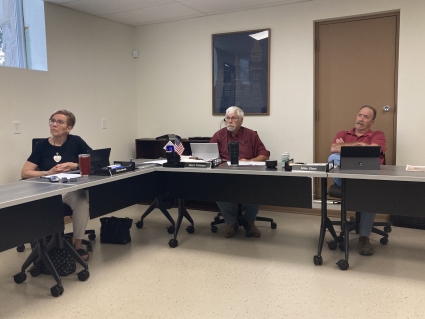 The Montgomery County Board of Supervisors has agreed to hire the services of the law firm of Ahlers & Cooney for assistance in drafting a carbon pipeline ordinance.
The supervisors met with Ahlers & Cooney attorney Tim Whipple at the regular meeting on Oct. 3. Whipple said he specialized in representing municipalities, political subdivisions, city utilities, counties and school districts.
“The issue of pipelines is one that a lot of counties and cities are grappling with around the state, and there’s not just one way to handle it. We would be here to help you chart a path forward that’s specific to Montgomery County,” said Whipple.
So far, Whipple said the firm is working with Shelby, Bremer, and Palo Alto counties thus far.
The supervisors sought the input of County Attorney Drew Swanson, who stated his recommendation that the supervisors seek outside council for assistance in drafting an ordinance remained unchanged.
Whipple said other counties had intervened with the Iowa utilities board, and if other counties wished to do the same, there was the possibility of sharing some of the cost for those proceedings, with details to be worked out at a later date.
Supervisor Donna Robinson questioned whether if the county passed an ordinance locally, if it would be enforceable. Whipple said the answer to that question depended on what other entities did.
“The filings that Shelby County has done are important in that respect, because all the pipelines need state permits. This issue was dealt with in regards to the Dakota Access Pipeline proceedings, and the board has the authority under pipeline permitting statutes to impose conditions on permits,” Whipple said. “One of the things they did on Dakota was require all of the other necessary permits before a state permit was provided, making them mutually dependent. Shelby County is requesting that they should impose the same kind of conditions for local permits. As for whether the ordinance is enforceable, it will really help if the utilities board requires compliance with local ordinances.”
Even if that did not happen, Whipple said individual counties had independent power under zoning powers to impose conditions and pass local laws, though certain requirements may not be enforceable and pre-empted by federal law. However, in pipeline cases across the country, federal courts have upheld local zoning ordinances as not pre-empted by federal law.
“If you stick with the right kinds of requirements in your ordinance, those things can still be enforceable,” commented Whipple.
Supervisor Charla Schmid asked Whipple if the county drafted an ordinance that specified the pipeline be kept a certain distance from a residence, if it would be enforceable. Whipple said he couldn’t say one way or the other.
“The reason we don’t know yet is because in the Dakota Access docket, not one county tried to adopt a zoning ordinance, and no counties tried to make the arguments that are currently being made to the Iowa Utilities Board. There are concerns being expressed this time around that weren’t expressed prior. It is my hope that the IUB will not attempt to preempt local ordinances. It is my view of their authority that they do not have the authority to do so,” Whipple commented.
Olson asked if all of this was new territory for the counties. Whipple confirmed that it was. Olson expressed his frustration that there were no clear answers, and the fact that it was uncertain if anything passed would be overridden or not.
The supervisors unanimously approved to engage the Ahlers & Cooney law firm to aid in the carbon pipeline process.