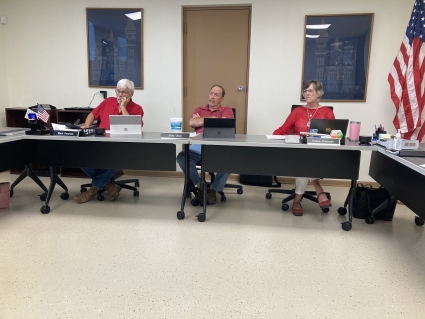 The Montgomery County Board of Supervisors has weighed its options on whether or not to appoint a new county auditor ahead of the November general election.
The supervisors first took up the discussion at the regular Board of Supervisors meeting July 12. Supervisors Chair Mark Peterson said due to timing ahead of the deadline for an appointee, he and Supervisor Mike Olson conducted the interviews with the two candidates that had applied for the position. Peterson felt there were a number of issues that needed to be discussed.
“We need to determine if we want to appoint someone to the position for the next several months, and let them run for election in November, or if we want to leave it open for a completely clean slate and let the new auditor be selected by someone who has chosen to run,” Peterson said.
Additionally, Peterson said the two applicants were currently in full-time positions elsewhere, and would have to quit to take over the duties of auditor.
“If we appoint one of the candidates, we’re then expecting them to run for election, possibly unopposed, or possibly opposed. Anything could happen there. Both of the applicants were from outside of government, so they don’t have any experience in the office,” said Peterson. “I will say that of the two applicants, Mike Olson and I both felt we had one candidate rise to the top, and if the board chose, we would be willing to recommend that candidate and setup an interview for all five of us to interview them together. We would even go so far as to recommend going ahead and appointing them.”
The deadline to make an appointment was July 18. Peterson said both applicants for the position were aware that if they were appointed, they would have to run for election in November and win in order to keep the post.
Supervisor Charla Schmid said it was a big decision to quit a full-time job for an appointed position, and then not win in the November election. Peterson agreed.
“If we do appoint someone, I guess you would say that we’re giving our seal of approval for them to run for the position and officially take it over, but that doesn’t prevent someone else from running, or more than one candidate running, depending on the party, who might win over our appointee. But regardless of that, I’m very comfortable that both candidates were very aware of the fact that they’ll have to run and were aware of the risks,” explained Peterson.
Supervisor Randy Cooper asked if they declined to appoint the candidate, whether or not they’d decline to run themselves in November. As the candidate was already employed, Peterson didn’t think that scenario was likely, but admitted that there was a possibility.
Supervisor Mike Olson said following the interview, the potential appointee, despite a lack of political experience, would be a good fit, and time may be limited to appoint them.
“I feel the person would be able to adapt and learn the new position in a short period of time. They have a lot of experience with corporate America and making difficult decisions and situations. My concern is that the candidate may not be available in four months, and may not run,” Olson said.
Cooper asked what would happen if the county failed to appoint a new auditor, and then in November, no one chose to run for the post, and questioned whether choosing not to act was a mistake.
“I’m a little nervous to be in a situation where if we have a good candidate now, and then we pass, what do we do if the person decides to move on to something else, or decides they don’t want to leave the position they’re currently in? It’s something that needs to be considered,” commented Cooper.
The supervisors agreed to meet as a full board and interview the candidate. A special meeting was held on Monday, July 18, where the candidate was revealed as Jill Ozuna of Red Oak.
At the July 18 meeting, Schmid expressed concerns over appointing Ozuna and potentially losing other employees in the auditor’s office, or other issues that may arise between now and the November election.
“There are a bunch of situations I’ve been thinking about, and while Jill is a very intelligent and capable woman, they’re just some things I’m throwing out for us to think about,” explained Schmid.
Robinson had the full confidence that the three staff members in the auditor’s office would work with them and give them a chance to grow in the new position and felt that everyone is, and would be, supportive of the appointment.
“I would agree that you interviewed very well and that you have the skill set to do this position,” stated Robinson.
Olson, Cooper, and Peterson were all in agreement to appoint Ozuna as the county auditor. After a vote, the supervisors unanimously approved the appointment for Ozuna.
Ozuna’s official start date will be on Aug. 1.