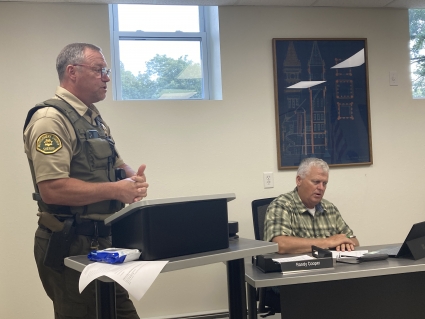 The Montgomery County Board of Supervisors has agreed to a request from the Montgomery County Sheriff’s Office for an additional staff member for the front.
At the regular meeting Sept. 6, Montgomery County Sheriff Jon Spunaugle said they are having problems keeping the front window open due to only having two staff.
“A lot of times, our office is shut down at 2 p.m., and if the front office worker takes any vacation at all, it’s closed as early as 11 a.m. If they both take vacation at the same time, the front office is closed for an entire day,” explained Spunaugle.
Spunaugle added he felt there was a good opportunity to bring a second staff member on during the day.
“We have enough work, and I’m going to create enough work that I can keep two busy. We’ve been single up there a long time, and a lot of the surrounding counties have two or three front office staff in total. We deal with civil cases, the court system, and all the small claims that deal with room and board. So there’s plenty to do up there,” commented Spunaugle.
Spunaugle also said some of the work that is currently being handled by one of his deputies, and some of the work being done by the dispatchers could be handled by two front office staff during the day.  The total salary of a new staff member, including insurance and IPERS, would be $70,000.  That cost, Spunagule said, could likely be covered by the funds raised from out of county inmates.
“In 2021, we started housing out of county inmates, and since the first of the year, that has brought in around $80,000. We are on track by Dec. 31 to bring in $120,000 just for this calendar year. I plan on keeping that going. Also, we’re taking inmate room and board through small claims and bringing in quite a bit more money through our own room and board by going after these people than we had before,” Spunaugle said.
Supervisors Chair Mark Peterson asked if a roundabout benefit would be that there would be more outside time available to a deputy if they were relieved of some paperwork duties. Spunaugle confirmed that was the case.
“Being specific, garnishments and sheriff’s sales are done by Sgt. Todd Dollen, and he’s kind of our civil guru. He’s very good at his job, but there are duties that could be assigned and trained to someone up front that he wouldn’t have to do. He could simply oversee it and make sure it’s getting done right,” stated Spunaugle.
Spunaugle said he had cross trained someone from the jail to try and assist up front, but it didn’t work because when the jail was short staffed, the cross-trained person had to return to their normal duties.
If approved, Spunaugle said the front desk hours would be changed to keep the front desk open the same hours at the courthouse, until 4:30 p.m. or possibly 5 p.m. Also, the lunch hours would be staggered.
“That office needs to be open five days a week, and all business hours. There’s exceptions for training or sickness, but it shouldn’t be on a weekly basis,” said Spunagule.
The supervisors approved a motion for Spunagule to hire a new full-time employee for the front office.