s it Merry Birthday or Happy Christmas for holiday babies 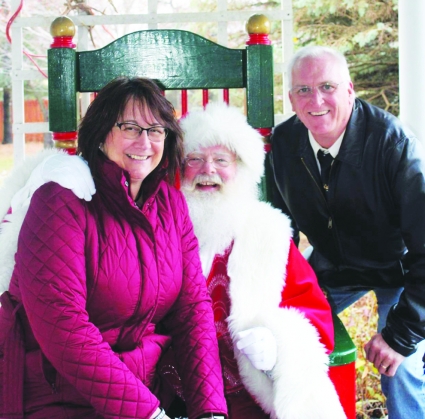 For those born on Christmas Eve or Christmas Day, sharing a birthday with Jesus isn’t as bad as it may seem. In fact, the local Christmas babies interviewed don’t feel overlooked amid the holiday chaos.
In fact, they all seem to enjoy it.
Holly Crowell, Registered Nurse and Quality Improvement/Infection Prevention Manager at the Montgomery County Memorial Hospital was born on Dec. 25, at the Murphy Memorial Hospital on Highland Avenue in Red Oak.
“I was born at 10:30 at night, so I allowed my family to have their Christmas celebration before I made my entrance,” Crowell said. “My mom and dad didn’t go to the hospital until about 6:30 p.m. or 7 p.m. when my mother decided that the cramping she was feeling wasn’t just her digestion working on her Christmas dinner.”
Crowell said although it’s “pretty awesome” to share a birthday with Jesus, it would be nice to go out for dinner on her birthday, which doesn’t happen since not much is open on Christmas and the family is often celebrating together.
As a kid, she didn’t place too much thought into having to share the holiday with her birthday.
“Christmas was my birthday and that was that. It was always acknowledged and I was fine with that,” she said. “My sister was born on New Year’s Eve three years earlier and my parents were the best as they always threw a little birthday party on New Year’s Eve for both of us and we played bingo for prizes with our neighbors.  It was one of the highlights of my year!”
She added there were separate gifts for Christmas and her birthday with different wrapping paper.
“I was always made to feel special because I was a Christmas baby. I usually waited to open my birthday presents until that New Year’s Eve party we had.”
She added her grandparents would also give her some kind of Christmas decoration for her birthday she could use in her bedroom or save for when she got older and had her own home.
“Because it was on a holiday and I usually shared my birthday celebration with my sister, I find parties given in my honor now to be almost uncomfortable and awkward.  Like I said before, I feel pretty special to be chosen to share a birthday with the Christ child - how can I complain about that? “
Former Red Oak city council member and Montgomery County Board of Supervisors member, Karen Blue, was born on Christmas Day in Glenwood.
“It was Christmas afternoon after my mother had served Christmas dinner to family guests. I was welcomed by a crowd,” said Blue. “I am the oldest of four and three of us have birthdays the week of Christmas. As we grew up, the family celebration was the Sunday before Christmas and gifts were always separate.”
She said as a child she felt bad for not being able to celebrate her birthday at school, and birthday parties were rare because it was such a busy time.
“I tried with a celebration six months later, in June, but it wasn’t the same,” she said. “A highpoint when I was small was sharing the day with Jesus. When I turned one, I fit well in the manger at the church’s Christmas Eve service.”
Kaile Hardy became a mom for the third time on Christmas Eve with her son, Cash. Cash was born at 8:30 a.m. at the Shenandoah Medical Center.
“His due date was Dec. 30, but went in early because it was cesarean. I was definitely wanting a Christmas baby, so I chose Christmas Eve,” Hardy recalled. ‘This will only be our second birthday, so I’m not sure how he feels about being a Christmas baby, but it is one of my favorite holidays.”
Hardy said for Cash’s first birthday, they held a small party about a week before Christmas, but this year they plan on him opening Christmas and birthday presents at the same time.
Becky (Kirchert) DeVries was born around 4:30 p.m. on Christmas Eve at the Murphy Memorial Hospital in Red Oak. She joked it was the first and last Christmas she got to spend with just her mother; as back then new babies and mothers spent five days in the hospital.
“My birthday celebration memory, other than pictures, is sharing my birthday with my baby sister. She is three years younger than me, born Dec. 15. Our birthdays were celebrated together with cake, ice cream and a gift,” she recalled.
She said she remembers getting back seat floor mats for her 19th birthday from her grandparents and front seat floor mats from them for Christmas.
“I laughed then and laugh today; it was a need - no big deal,” she chuckled.
Since she met her husband in 1989, he’s made sure to celebrate her birthday first, then any Christmas Eve activities. She added her friends attempt to make her birthday special, too.
“A couple of surprise parties were held; one a week before and one was two months before; we even tried a half birthday, but that was a flop,” Devries said.
As for advice for parents with Christmas babies, she said to make them feel special in any way possible, regardless of what day of the year they’re born.
“Make them feel special as they start their day with feel good feelings about being alive - whether a planned pregnancy, an adoption or unplanned pregnancy,” said DeVries.