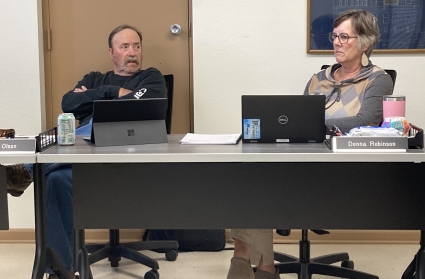 The Montgomery County Board of Supervisors were urged to take action on the proposed carbon pipeline ordinance.
Vicki Rossander, representing the Montgomery County Planning and Zoning Commission, met with the supervisors, and commented on the recent events that have put a hold on the ordinance that was approved weeks ago by the commission.
At a prior meeting, Planning and Zoning Commission Member Naomi McCunn sent a letter which stated she felt it was in the best interest of the county to let Summit Carbon Solutions have a seat at the table as the ordinance is being written and reviewed, so the county did not incur any legal problems in the future. Rossander felt it seemed to imply the ordinance should be adjusted to make it more satisfactory to Summit, and also expressed concerns that zoning administrator Barry Byers had sat with Summit representatives to discuss concerns with the county’s proposed ordinance, and discuss the legal enforceability of any ordinance the county may pass.
“It doesn’t seem prudent or logical to me that we write any ordinance based on the threat of possibly being sued sometime in the future. We should write this and all ordinances with the belief that they are needed to protect our county, its citizens, their property, and their livestock,” commented Rossander.
Rossander also stated she was baffled why anyone would sit down with one of the entities the county was trying to regulate so they could dictate to the county how to write or change the ordinance.
“We did not sit down with MidAmerican Energy when we wrote the recently-passed solar ordinance, and I seriously doubt we’ll sit down with MidAmerican when we update the wind ordinance in the future,” stated Rossander. “Why would we sit down with Summit to write the pipeline ordinance? I think we need to be very careful about allowing entities that we are trying to regulate to have a voice with how ordinance is written and what they state. Let’s rely on the experts at Ehlers & Cooney, and not on Summit.”
Supervisor Randy Cooper advised the other members that he had been in contact with Brian Shea with the Pottawattamie County Board of Supervisors, and Shea informed him the county was doing no ordinance.
“We’re letting the Iowa Utilities Board make the decisions, and said it was because they felt an ordinance had no teeth. However, I touched base with the IUB Board, and I feel an ordinance is still good, as it will give a landowner some ammunition to negotiate with the pipeline,” Cooper said.
Cooper said he was still in favor of the county passing an ordinance, even if it came down to the courts, and the ordinance didn’t hold up, and if the ordinance was overruled, that the county shouldn’t spend money fighting the legality in court.
Supervisor Donna Robinson felt the supervisors needed to wait and see what happened as time went on before making any ultimate decisions.
Supervisor Charla Schmid was in favor if the ordinance, as this was only for one pipeline, and the future of land in Montgomery County was in question, and an existing ordinance would help with that.
The supervisors agreed to have all the necessary members of the planning and zoning board, and other county entities sit in at the next meeting with Ahlers & Cooney to make sure everyone was getting the proper information.