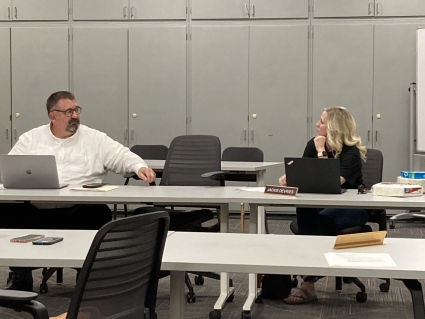 The Red Oak School Board is finalizing a path forward for assessing the facilities needs and outlining a long-range plan moving forward.
School Board President Bret Blackman said the board issued requests for proposals for the facilities master planning process, and had heard some responses that would be discussed at a future board meeting. Blackman said space, or the lack therof, continues to be the biggest issue, due to the number of students.
“One of the things that’s different now from when I first joined the board, was that our enrollment was dropping about 20 students per year. This year, we’re up 36 students, and we also know that our early childhood center is at max capacity. While that’s a good thing, it’s not something that we were facing when we did the facilities planning five years ago,” Blackman said.
While the district has cash on hand, and the ability for bonding capacity, Blackman said the first priority was utilization of the space the district already had.
“It’s important for us to have Superintendent Lorenz give us some data and facts about our space utilization, and continue down the path of hearing from the respondents to our RFPs that will help us prioritize and understand what our space needs are,” Blackman commented. “But I would think that we would have an expected outcome of action, and not be kicking this six to 12 months down the road. I would anticipate by June that we’ll have a finalist list for those that submitted RFPS, and select as a board who we want to immediately engage in the process.”
Superintendent Ron Lorenz said there was a definite space crunch at Inman Elementary that needed to be addressed sooner rather than later.
“We’re anticipating a large kindergarten class next year, and we’re scrambling a bit to try and find where to put them. We have a possible solution that, board willing, we can pursue, but right now we’re in a place where we simply don’t have classrooms for all the kids that are coming to us, and we have to figure out how we navigate that. We do have some alternatives, or ideas, but we want to make sure we don’t do anything that limits the board, or paints us into a corner. We let the experts advise us,” advised Lorenz.

So far, the district has received around 11 responses from 16 firms contacted.
Of those responses, each is around 40 to 50 pages, and Lorenz said he has just started to preview them.
“The plan is for the facilities committee to come together and limit that list down to three proposals. We’ve met with several of them, and I believe one firm is going to look at the facilities deeply, and look at the structural integrity of the spaces, the utilities, and the way we’re using the spaces to see if there are ways we can be more efficient. I would think within three to six months, we’ll have something more finalized, but that’s one step from speculation,” explained Lorenz.
Board member Kathy Walker said she had been contacted by parents about the possibility of moving the sixth grade class to the junior/senior high school. Lorenz said he didn’t see that as a feasible option without hiring more teachers.
“I’ve been contacted by people as well, and when I start explaining the teacher requirements, the staffing requirements, and other details, they see the difficulty. I feel that we have to educate people. They want what’s best, and they want to find solutions, and on the surface, it seems like a great idea, and an easy fix, but it’s a lot harder than it seems. I’m not saying it couldn’t be done, but it would be challenging,” Lorenz said.
One of the items on the agenda to address the lack of classroom space at Inman was the lease of a two-room portable modular classroom with a 39-month lease at $136,902.
Lorenz said the board was limited in options.
“The unit is available from a company named WillScot in Fremont, Neb. We called several other companies, and no one else had anything. One company offered to build one, bit it wouldn’t be ready until October or November,” stated Lorenz.
While his preference was for a three-classroom unit, they weren’t available. A two-classroom unit would allow them to create a resource center to provide special education services, extended learning opportunities, and since it was adjacent, there would not be a need for plumbing to be installed. The building also came with ADA-compliant ramps.
“I think this will help us out, and if nothing else, it will help us see where things are as we move forward,” said Lorenz. “I know people aren’t crazy about portables, and if we do nothing, I don’t think the board will be satisfied with the outcome.”
The board approved the lease from WillScot for the portable classroom.