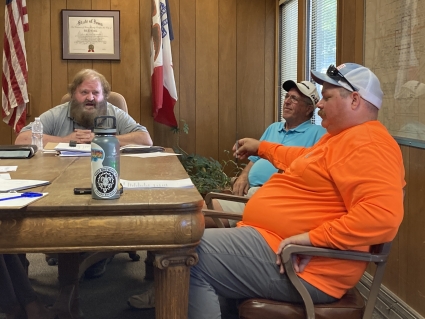 The Red Oak Park and Tree Board met for its regular monthly meeting July 14.
The board met with Red Oak resident Sara Orme, who requested the use of the Red Oak Municipal Pool for a special “doggy dip” event after the pool season. Board Chairman Bill Drey said he remembered similar events being held in the past.
“I was conversing with Tracy Vannausdle, and when she was a lifeguard, we both remember having a doggie dip event in the late 1990s,” Drey stated.
Orme said the idea wasn't a new one, and that there were many other communities that held similar events.
“We previously lived in Omaha, Neb., and it was very popular there. What happened there was after the pool season was over, and before they drained the pool, they opened it up to dogs and their owners for day swimming. It encourages community participation, It usually fell on a Sunday night, and ran for about two hours,” Orme said.
Orme suggested the possibility of charging a small admission price and donating the money to aid in the purchase of an animal shelter in Red Oak. Orme felt costs to the city would be minimal.
“I think the only cost to the city would be to have a couple of lifeguards on duty, since there will be humans swimming. I can’t think of anything beyond that,” commented Orme.
Park superintendent Adam VanDerVliet said he had preliminary discussions with the City of Red Oak on the proposal, and said they were looking into what liability insurance would be needed to hold the event.
“We’ve sent an email out to the insurance carrier to see how other cities have done it, because obviously it’s been done before, so I don’t think it would be too difficult an undertaking,” advised VanDerVliet.
VanDerVliet asked what limitations were needed for chlorine to make the pool safe for dogs to swim. Orme suggested waiting a week or two after the pool season with no new chlorine added to the pool to make sure the water was safe.
Drey also advised Orme to contact Red Oak City Clerk Mary Bolton to finalize other details including costs and insurance information.
The board approved the proposal for the doggie dip event, pending Orme contacting Bolton to finalize additional details.
The board also discussed a request for a memorial bench at Fountain Square Park in memory of Randy Vanderhoof. Drey said there was a potential location for the bench near the Freedom Rock.
“We can place the bench on the west side of the rock, so there’s one on each side. I have heard back from the Red Oak American Legion, VFW, and the Montgomery County Veterans Memorial Court of Honor and they all granted permission for the bench to be placed in that location,” advised Drey.
Drey added they are keeping the memorial bench the same as the others already in the park.
“They wanted a red, white, and blue one at first, but I informed them that we keep all the benches green on the square, and the Vanderhoof family is aware of the pricing of the bench,” said Drey.
The board approved the request for a memorial bench in memory of Vanderhoof.
In other business, the board:
• Approved a request from the Classy Chassis Car Club for use of Fountain Square Park, including the shelter house, on Aug. 20 for the car show.