Paradise addresses board on pipeline services 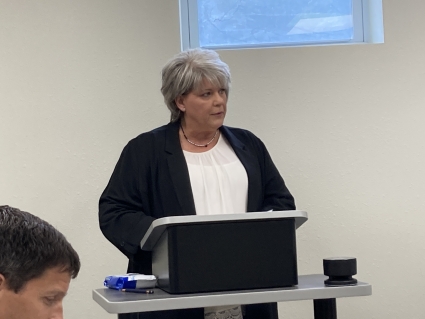 The Montgomery County Board of Supervisors received a second proposal for pipeline inspection services at its meeting July 26.
The supervisors met with two representatives from Snyder & Associates Engineering: Kristina Paradise, construction technician with the Fort Dodge office, and Dave Sturm, business unit leader with the Atlantic office.
Paradise said they have spoken with seven counties so far about inspection services, and five counties have entered into a contract for services. While Paradise said she is the main point of contact, all of the services to Montgomery County would be provided by the Atlantic office. Paradise also said she had a lot of empathy for the landowners.
“I will be the person the pipeline will call for inspections, and then I will direct Dave Sturm to dispatch his people to the location,” Paradise said. “As for the project, I’m aware there is a lot of controversy, and we intend to inspect this project like it was being done to our own property.”
Paradise said the first step would be to have a community meeting with the landowners to exchange contact information. Paradise said they could contact her day or night with concerns.
Paradise said if the supervisors did not have a resolution in place regarding certain aspects of the pipeline project, she encouraged them to do so.
“The resolution should specify the depth of cover over this pipeline, what’s going to happen with your drainage tiles. I encourage you to spell all of that out, and I have some examples I can send to you to use as a model. Pocahontas County has a good one that they just put into place,” said Paradise.
Supervisor Mark Peterson advised they didn’t have a specific tiling engineer for the county, so Paradise confirmed if they were selected as the inspector, that was another aspect of the project they could oversee. Also, Snyder & Associates had the ability to issue stop work orders if needed.
“If the work is not proceeding according to specification, we will stop them, we will correct them, and they will have to re-do the work that was not done according to spec,” Paradise advised. “If we have a violation, we write it up, turn it over to the supervisors, and then you take it to the Iowa Utilities Board.”
Supervisor Mike Olson asked if Snyder would be engaging in stockpiling the topsoil, so it could be moved off to the side, redressed, and replaced. Paradise confirmed that was the standard process for Snyder.
Supervisors Randy Cooper asked what fees were required to be paid for by the county. Paradise said all costs should be covered by the pipeline company.
“The pipeline pays for the county inspector 100%. We will bill you. You will take the bill to the pipeline company, and once the pipeline pays you, you pay us. There may be some engineering fees prior to the start of the project, and the pipeline company would be billed for them eventually. However, if the pipeline doesn’t pay it, the county is not on the hook for any of it,” explained Paradise.
While the county will have a contract with Snyder, Paradise made it clear that all fees would be collected from the pipeline company, and if there were fees, they would be paid if the pipeline was constructed or not. Paradise reiterated that if the pipeline didn’t go forward and fees were generated, the county would not have to pay any of them.
The supervisors took no further action, and discussion and a selection of the engineering firm is expected at a future meeting of the supervisors.