No tax dollars will be used to purchase second city ambulance 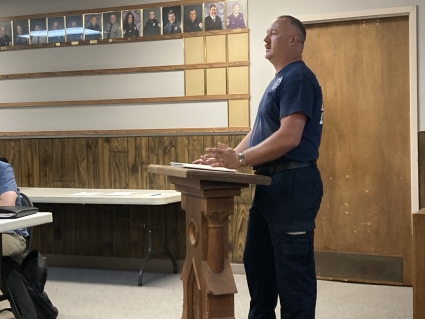 The Red Oak City Council has approved a resolution allowing the Red Oak Fire Department to seek a second new ambulance.
At the regular Red Oak City Council meeting Sept. 6, Red Oak Fire Chief John Bruce  said they only found out a very short time ago that the United States Department of Agriculture did have grant funds available, after being told no.
“We were looking at ways to fund it, and then City Clerk Mary Bolton was contacted by the USDA and were told that the timeline was that Sept. 7 was the deadline to file the application, so we are just in the nick of time with this,” Bruce said.
Currently, the department’s inventory includes a 2000 Freightliner that serves as a reserve, although on Aug. 1, it was the only ambulance they had in service as the other three were down. The second ambulance is a 2017 Dodge that has a blown engine. A new engine is soon to be installed, and there’s a smaller turbo that has been. Also in service is a 2010 International and also a 2015 Ford.
Bruce said the grant will cover 55% of the cost of the new ambulance, and it was an amount of money they couldn’t leave on the table.
“We’ve got to keep this fleet rotated in and on the road and ready to go at any time, especially with the amount of transfers we do,” said Bruce. “We’ve got to have the fleet in place so our staff can get in and get folks taken care of right the first time.”
One ambulance is currently ordered, with expected delivery in December. That ambulance will replace the department’s 2000 Freightliner.
Bruce also said that the cost of the new ambulance will jump by $8,500 on Oct. 1, so by getting an order in now, they would save some costs when the price increases. Of the three quotes submitted, Bruce had a recommendation of purchasing a Lifeline ambulance for $306,507.
“They’re a good company, and they build in Sumner, Iowa. The USDA portion would be $168,578, and the remaining portion would be paid from American Rescue Plan Act funding, $137,928, so there would be no tax dollars utilized by citizens directly. It would all be done through federal funding through those two programs,” commented Bruce.
Another important factor in getting the ambulance ordered now is due to the long time frame it will take from order to completion.
“I’ve been told delivery would be within a year to 18 months, but there’s a question mark regarding chassis availability. It could be up to two years,” advised Bruce. “They can build the box, but they have to have the chassis, and know whether it’s going to be a Dodge or a Ford before they can build a box. Hopefully it will be a Dodge chassis and repairs can be made locally whenever needed.”
Also, Bruce advised the council that the delivery dates would be the same time frame, even if they accepted one of the higher quotes.
The council approved the resolution to apply for financial assistance with the USDA to finance a portion of the cost of purchasing the new ambulance.
In other business, the council:
• Approved the purchase of new nameplates and badges for the council members.
• Approved a resolution proposing the sale of city owned property at 818 E. Nuckols St. by sealed bids.
• Discussed the establishment of the mayor’s youth advisory council. Final approval is expected at the next regular council meeting.
• Approved a resolution setting the wage of Evan Drake in the Red Oak Street Department at $20 per hour.
• Approved an alcohol license with Sunday sales for the Five One 8.