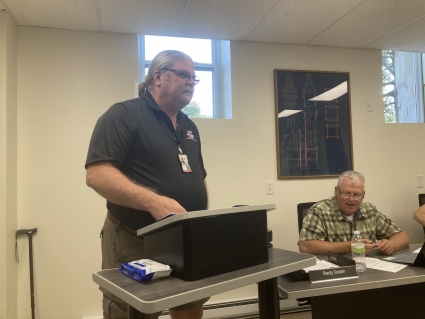 The Montgomery County Board of Supervisors has agreed to partner with a nationwide event honoring veterans.
America’s counties have a long and proud history of serving the nation’s veterans, a legacy that continues to this day as they work with  federal, state and local partners to ensure that the former service members in their communities have access to the resources they need to thrive
Montgomery County Veterans Affairs commissioner Curtis White spoke before the supervisors at the regular meeting on Sept. 13. White said to honor those veterans, a special event was planned for November.
“This coming Veterans Day, the National Association of Counties and the National Association of County Veteran Service Officers are inviting all 3,069 counties, parishes, and boroughs to join ‘Operation Green Light,’ by lighting  buildings green from Nov. 7-13,” said White. “By shining a green light, county governments and our residents will let veterans know they are seen, appreciated, and suported.”
White said he was hopeful the county would pass the resolution declaring the county’s participation.
“The backstory to this is that a program was created in New York last year and was very successful, and so NACo felt it was a great idea and should be done across the nation, so this will be the inaugural year for the national celebration of ‘Operation Green Light,’” commented White.
If approved by the supervisors, White indicated he intended to share the proclamation to other area cities to secure their involvement in the program as well.
“The residents of Montgomery County Iowa have great respect, admiration, and the utmost gratitude for all of the men and women who have selflessly served our country and this community in the armed forces, and the contributions and sacrifices of the men and women who served in the armed forces have been vital in maintaining the freedoms and way of life enjoyed by our citizens, Montgomery County seeks to honor these individuals who have paid the high price for freedom by placing themselves in harm’s way for the good of all.
The Montgomery County Board of Supervisors hereby declare from October through Veterans Day, Nov. 11, as a time to salute and honor the service and sacrifice of our men and women in uniform transitioning from active service; therefore, be it resolved that in observance of Operation Green Light, Montgomery County encourages its citizens in patriotic tradition to recognize the importance of honoring all those who made immeasurable sacrifices to preserve freedom by displaying a green light in a window of their place of business or residence.”
Supervisor Donna Robinson said at the recent meeting of the Iowa State Association of Counties, a NACo representative was present who shared details about the special event and she was pleased the county would be able to participate.
White said he had reached out to maintenance supervisor Dan Wright to discuss the possibility of placing green film around the bulbs of the lights at the courthouse from Nov. 7-13.