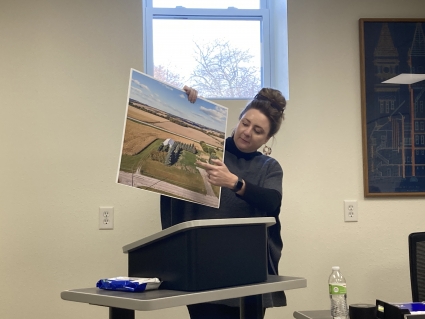 The Montgomery County Board of Supervisors has set public hearings for a zoning change and a road upgrade.
At the regular meeting Nov. 15, the supervisors received a petition for rezoning filed by Joshua Kendrick for property at 2663 U Ave., near Villisca, specifically, lots 15 and 16 in south Villisca in the NE-NE of section 28-71-36. The request was to change the zoning designation from residential to commercial.
The supervisors heard comments from Megan Kendrick, who said a portion of the property is already zoned commercial, but not entirely.
“This portion to the north sits in a residential zone. There was a house there in the early 1990s that burned down, and we’ve leveled it out, added trees, and tore down some old farm buildings.  What we’re wanting to do is make an outdoor storage area for boats, RVs, and that type of equipment,” Kendrick said. “We’ll have a big fence and a lockbox gate that everyone has their own code to get in, and have a couple of lights and cameras to keep it secure.”
Kendrick said it was felt with the location not too far away from Lake Icaria and Viking Lake, the property’s location near highways 71 and 34 would be a good location for the outdoor storage area.
Supervisor Mike Olson asked if they planned to build a new structure. Kendrick said they planned on simply a fence and gravel lot for outdoor storage.
“We still have a barn there that we’ll keep and we typically use it for storage. We’re just looking to expand what we’re doing, and make it more of an open business. We wanted to go about it the right way and make sure it was zoned correctly,” stated Kendrick.
Zoning administrator Barry Byers said the proposal had already been approved through the Montgomery County Planning and Zoning Commission.
Byers then addressed the supervisors with a request for a public hearing for the upgrade of 222nd St. from a Level B to a Level A road. Byers said the road was located near the county farm, at 2246 Highway 48, Red Oak.
“This is a dirt road located just north of the county farm. We were going to upgrade approximately 600 feet of that so we could get to our north driveway, and the county farm tenant said he was interested in upgrading the rest of the road all the way to Hickory Ave.,” Byers said. “It didn’t need any grading work other than a quick touch-up. I think we’re going to put a mix of limestone and red rock on it.”
Byers said the tenant had already been in and signed an agreement with the county for his portion of the road upgrade.
The supervisors set both public hearings for the Dec. 6 Board of Supervisors meeting.
In other business, the supervisors:
• Approved the recorders report of fees, in the amount of $14,894.
• Approved a tax transfer from rural services basic to secondary roads, in the amount of $61,057.
• Approved a tax transfer from general basic to secondary roads, in the amount of $5,596.