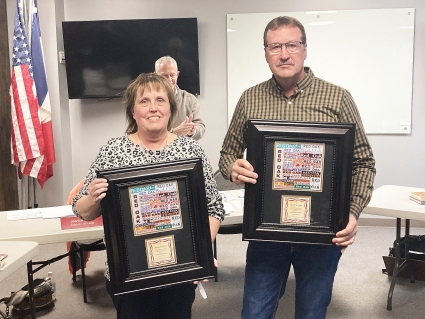 The Red Oak City Council will wait to decide on an interim administrator tuntil Dec. 5.
At the regular meeting Nov. 21, the council heard a presentation from Al Vacanti of Vacanti Municipal Services for interim administrative services as city administrator and clerk for a three-month period. Vacanti said he served as a city adinistrator, as well as a city clerk/administrator for roughly 14 years in Nebraska before retiring in 2019 and creating his consulting services.
“I created the business primarily to stay in the field of public service. A lot of communities over there require you to wear two or three hats, so you get experience in various aspects of community operations,” Vacanti said.
Prior to that, Vacanti said he spent 20 years practicing law. Later, he went back to school and received a Master of Public Administration in 2012.Vacanti siad if the opportunity was given for him to serve in the capacity, he wanted to make it clear he wanted to take the work already done and carry them forward.
“I want to guide the projects already in progress further along towards completion, or to completion, if possible,” advised Vacanti. “For other projects waiting to be commenced, we would get those started working together with the city employees, with the elected officials, and with others throughout the state of Iowa.”
Vacanti made it clear he had not worked in Iowa, but he had people within the state who offered assistance. Vacanti also said he had been doing homework regarding the city’s budget.
“I know the budget is due in the middle to latter part of March. That would be done, and done successfully. That is perhaps the most important thing to complete in the interim until you find the permanent successors to those people,” explained Vacanti.
Vacanti also stated he wasn’t there to shake anything up, simply keep things moving forward that needed to move forward, and start what needed to be started, while working with city employees and the community
City Attorney Bri Sorensen cited a few details in Vacanti’s proposal that she felt needed to be addressed.
“It does look like it was a little specific to the State of Nebraska, so as a point of concern, I would just make you aware that Iowa and Nebraska are very different,” Sorensen commented. “There’s also some legalities that I would like to see pointed out and at least discussed in that agreement, specifically, that Iowa law would govern that there would be a termination provision. While three months seems like a short period of time, it can be very long if it is not a good working situation. Certainly some provisions in there to protect the city would be smart.”
City Council Person Brian Bills asked what happened if it took longer than three months to find successors. Vacanti said he was open to extending his serivices with a letter of understanding, and expressed openess to review the contract with Sorensen, and stipulate a termination agreement.
The council was open to approving the contract, but wanted to make sure everyone was completely on the same page. The council agreed to move discussion and potential approval of the contract to the Dec. 5 meeting.
The Monday night meeting was also the final one for city administrator Brad Wright and city clerk Mary Bolton. Councilperson Jeanice Lester presented both with awards and words of praise.
“I always got an honest answer, and we appreciate everything you’ve done. I hope you enjoy retirement, it is a good thing. I hope you take the time to do the things you love and enjoy the people you love,” said Lester.
Bolton spoke briefly during the meeting about her impending retirement from the city.
“I’m looking forward to it, and I’m also not looking forward to it. When I started, the first computer took up one whole room, and now look at it,”  Bolton stated.
Wright praised his time working with Bolton, and all of the city’s staff.
“We’ve got a team that I hope you guys appreciate. It doesn’t matter what the job is, or the limitations of our resources is, everybody ties it together to get the job done,” commented Wright.
Multiple department heads and citizens also spoke during the meeting, praising Wright and Bolton for their work over the years, and wishing them well, including Red Oak Police Chief Justin Rhamy, Fire Chief John Bruce, Chris Baird, John Haidsiak, Bill Haufle, Bill Drey, and John Pruss.