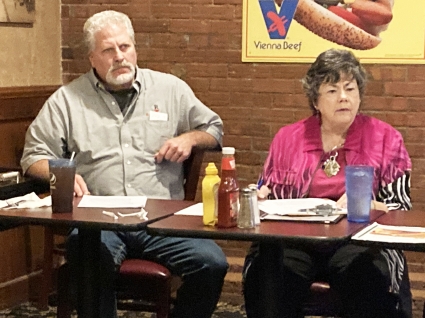 Three downtown projects are soon to be funded following action by the red Oak Downtown Urban Renewal Board.
The board met for its monthly meeting on Nov. 2. DUR Chairman Roger Vial said there was one project on the agenda requesting first round approval for eligibility, The Bridge/First Baptist Church at 406 N. Third St.
“They have replaced their entire roof, at a cost of $61,569. The material used is Duro Last. They have a welding heat gun that melts the material together like a patch on a tire. The warranty is for 15 years,” Vial said.
Vial said the work was done by McDermott & Son roofing out of Atlantic. As per the bid, the existing roof was removed, the decking was redone, and the Duro Last roof product was installed.
“The only upgrade is, they put fancier flashing on the front side of that to wrap metal up and over the concrete, so water wouldn’t get behind it anymore, which was a $650 upgrade, raising the project from the initial estimate of $60,919 to the $61,569,” Vial commented.
The grant request was for $7,500. The board granted first-round approval and grant eligibility for 406 N. Third St.
The board then moved to projects that were awaiting final approval. The first project was from the Red Oak Chamber and Industry Association at 307 E. Reed St. A bid of $8,890 was received to install new flooring in both second story apartments. The grant request was for $2,222. The DUR Board granted final approval, with DUR Board member Steve Adams abstaining.
Also completed, with proper documentation, was 204 E. Reed St., Davis-Taylor Insurance, a grant request of $7,500 for the replacement of the roof. Cost of the project was $43,798. The roof was given an 18-year warranty, and had a life expectancy of 30 years. The work was done by Grand River Roof Solutions of Buffalo, Mo. Final approval was granted by the DUR Board.
The final project seeking final approval was the roof replacement at 406 N. Third St. Again, Vial confirmed the project’s completion and that he had the proper documentation. Final approval was granted by the DUR Board for the project.
One project still awaiting final approval was 317 E. Reed St., Mark Jackson’s Red Oak Hardware Hank and Hallmark Gold Crown Store, to assist in the replacement of all the older single pane windows facing north. Jackson gave a brief update on the project, and said they were still waiting.
“The windows are still not here, and the price on the windows may go up a little bit. We’ll see what the price is when they arrive. We’ve been waiting for the windows now for more than a year,” advised Jackson.
The three projects then moved to final approval with a request for funding. All three projects, 406 N. 3rd St., 204 E. Reed St., and 307 E. Reed St., were all approved for final grant funding. Adams again abstained from the final vote approving the work at the ROCIA building.
Vial said he would notify Red Oak City Clerk Mary Bolton to get the process going for the three projects to receive payment.