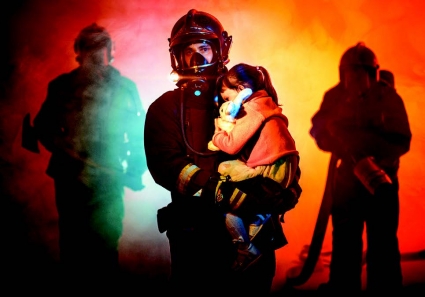 Each year in the United States, heating equipment causes more than 65,000 home fires. According to the Electrical Safety Foundation International (ESFI), heating equipment is the second leading cause of home fires in the U.S.
Despite space heaters being a convenient source of supplemental heat in the winter, they also pose a fire hazard if not used properly. Red Oak Fire Chief John Bruce said while warmth is important, following a few safety rules when it comes to space heaters is vitally important.
According to the ESFI, space heater instructions and warning labels should be read prior to usage. Space heaters should also be inspected for broken plugs, cracks or loose connections. If there are worn or frayed wires, do not use.
If leaving the room or going to sleep, turn off the space heater, and never leave it unattended. Don’t let children or pets get too close to a space heater, and always place them on a flat level surface. Do not use an extension cord or power strip with space heaters, as this can lead to overheating and the start of a fire. Only plug a space heater into an electrical outlet.
Do not place space heaters in high traffic areas where they may be knocked over, and keep them at least three feet from anything that is flammable, including clothing, rugs and paper.
In addition to space heater safety, Bruce reminds citizens to be aware of extension cord hazards, especially with holiday decorating taking place. Bruce said more than 3,000 home fires are caused annually by improperly used extension cords.
Simple steps include not plugging extension cords into one another; making sure the extension cord being used meets or exceeds the power needs and is being used for its intended use; keeping cords out of standing water and clear of snow, not stapling or hammering cords into walls and not using cords with loose connections or frayed wires. Bruce added fo not use three-prong plugs with outlets with two slots.
Lastly, Bruce wanted to remind citizens about carbon monoxide (CO), a poisonous, odorless, colorless gas, referred to as the silent killer. Bruce said CO is virtually undetectable without a CO alarm. Each year, 170 people die from CO, he added.
“CO is created when common fuels burn incompletely; this includes gas, wood, coal and natural gas,” said Bruce. “It can also be caused by portable generators, clothes dryers, water heaters, cooking appliances, and cars left running in enclosed areas.”
CO poisoning can occur by small amounts over a long period of time or a large amount over a short amount of time. Extremely high levels of CO can kill a person in minutes, said Bruce.
“Early detection is paramount in the preservation of life as well as property when dealing with CO and smoke detection,” said Bruce.
Symptoms of CO poisoning are headache, nausea, drowsiness, fatigue and shortness of breath. Infants, those with lung and/or heart issues, and pregnant women are more severely affected by CO.
To reduce the risk of CO, operate appliances the way they are intended; keep furnace, dryer and fireplace vents and vehicle tailpipes free of snow; never use a portable generator inside a home; never leave a car running inside an enclosed area; and have fuel burning and heating appliances inspected by a professional each year.
“It is 2021, and we still see multiple facilities that are occupied by individuals, and there is no CO or smoke detection working. It really does come down to life preservation with this early detection,” said Bruce. “If someone were to have an alarm activate, please don’t be afraid to contact your local emergency services so that the situation can be assessed appropriately and resolved just the same.”