Board of supervisors to update county employee handbook 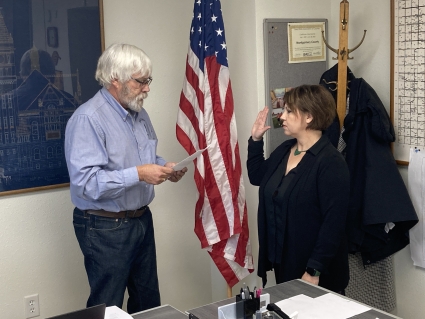 The Montgomery County Board of Supervisors will review potential changes to the employee handbook for the county employees.
At the regular Board of Supervisors meeting Nov. 22, the supervisor Donna Robinson suggested the possibility of deciding changes through a work session.
“That would allow us to sit down, really dig into this, and include other department heads if necessary,” Robinson said.
County auditor Jill Ozuna said she wasn’t sure how updates had been done in the past, but she had a number of changes noted for review.
“We’ve encountered situations where we go to the handbook for answers, and the answer isn’t covered in the handbook. There’s also things in the handbook that are vague and unclear that we need to clear up. I’ve also been in contact with Renee Von Bokern with VonBokern & Associates, our HR firm,” Ozuna said. “I’ve also had some suggestions from IT director Sonia Morrison, to refine the turnaround time for the process, the turnout time for IT, the turnaround time for HR and the auditor's office, just have it clean and easy to understand, so that there's no confusion.”
Another issue noted by Ozuna was determination of comp time between departments that worked 37.5 hours, and those that worked 40 hours.
“It has been extremely confusing, and perhaps not calculated property in the past for comp time for 37.5 hour workweek employees. There’s nowhere in the handbook that specifically lists one group as 40 hours, and the other as 37.5 hours. People know it, but it’s not broken down in black and white,” commented Ozuna.
Supervisor Mike Olson suggested an email be sent out to all of the county department heads for input.
“Generally, it’s just verbiage on paragraphs or items in the handbook. In my experience, the process to make changes has involved one or two supervisors, as well as whatever department heads want to meet, and sit down, and go through those, and those would have to be reviewed by HR, and our legal counsel, before they came back this way, and sit down in session and discuss what changes needed to be made,” Olson explained.
Rather than have a meeting with only two supervisors, Robinson preferred a special agenda work session that everyone was a part of.
“Jill Ozuna has a corporate background, as well as Charla Schmid. Randy Cooper works for a company. Everyone has some knowledge that I think would be important to add to the conversation,” stated Robinson.
The supervisors agreed to have Ozuna email all the department heads about handbook revisions, and set the deadline for responses to be Dec. 2, to allow for the courthouse being closed Nov. 24-25.
The supervisors also discussed the potential dates for a work session, preferably with HR representative Von Bokern present. The supervisors chose Dec. 5 and Dec. 9 as potential dates, and advised Ozuna to contact Von Bokern to see what day worked for her schedule.