Board of Supervisors approve annual funding request for WCCA 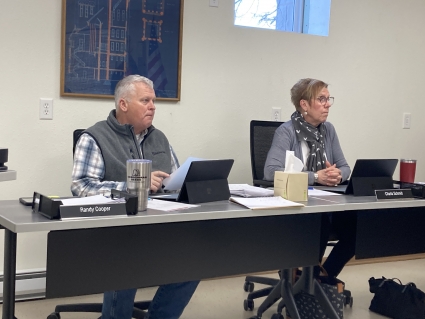 The Montgomery County Board of Supervisors has agreed to the annual funding request from West Central Community Action.
At the regular supervisors meeting Jan. 10, the supervisors met with WCCA executive director Wendy Mueller, who outlined some of the important things that WCCA does to help those in need in Montgomery County.
“West Central Community Action provided $1,749 million worth of services to Montgomery County. We served 528 households, consisting of 1,167 individuals. Of the households, 46% were single households, 62% had an income below the 100% federal poverty guideline, A total of 59% were on a fixed income, 46% were people between the ages of 18 and 59, and 52% of the households owned, or were buying, their homes,” Mueller explained.
Mueller said WCCA also provided head start services, which promoted school readiness for children ages 3-5 in low income families by offering a variety of services, including educational, nutritional, health, and social services.
“We operate two head start classrooms in Montgomery County. One is located at Sunshine and Rainbows in Red Oak which serves 16 children, and one through the Red Oak Community School District, which serves a total of 20 children,” commented Mueller.
WCCA, Mueller said, also offered early head start, providing support for low income infants, toddlers, pregnant women, and their families, and a home-based program in Montgomery County that served a total of 12 children.
Another service benefiting children in Montgomery County was West Central’s Child Care Resource and Referral.
“This program really assists families in selecting childcare providers that best meet their needs. It also assists home providers that are registered, or those that want to be registered, as well as child care centers to participate in a quality rating system to really improve their overall care. They also provide trainings and work with communities and businesses to find childcare solutions,” Mueller said.
Mueller added 75 children enrolled in childcare at six home providers took part in the child and adult care food program through WCCA.
West Central also assists families beyond childcare. The weatherization program offered distributed $123,531 in weatherization services to four homes in Montgomery County. Beyond weatherization, the organization’s Low Income Home Energy Assistance Program, or LIHEAP, helped households pay a portion of their residential heating costs.
“We assisted 466 Montgomery County households in 2022, and they received utility assistance of $248,649. LIHEAP approved households also received supplemental payments of $176,538. Emergency Crisis Intervention Payments, for weather related and supply shortage emergencies, assisted 65 Montgomery County households for $55,765, and American Rescue Plan Act ECIP paid $64,672 to 92 Montgomery County Households,” advised Mueller.
WCCA also debuted a Low Income Water Assistance Program (LIHWAP) which provided $3,511 to five Montgomery County households needing water assistance.
Another feature available to Montgomery County residents is an emergency food pantry, which allowed access to families six times per year.
“It’s available to households and individuals residing in Montgomery County. There are no income eligibility requirements. We assisted 112 households and 271 Montgomery County individuals in 2022,” Mueller commented.
The final two programs offered by WCCA are Family Development and Self Sufficiency, and Women, Infants, and Children (WIC)
“The specialists in the FaDSS program really provide intense case management to help participants meet their goals. A total of 10 families benefited from the program. WIC had 177 participants in Montgomery County, and $61,137 of WIC food vouchers were distributed. Most of those are spent at your local grocery stores,” Mueller explained.
WCCA was seeking $3,500 in funding, an increase of $500 from last year’s total. Mueller said they have not asked for an increase in funding since 2016.
“The funding helps our outreach services, any local match requirements, and any additional funds that we need to administer West Central programs in Montgomery County. Charla Schmid also does a great job on our board of directors,” Mueller commented. “On behalf of all of our employees and the board of directors, we express our appreciation for your support.”
Board Chairman Mike Olson said the agenda indicated potential action on the request, and asked if the supervisors supported approving the request or waiting until the county was further along in the budgeting process.
Schmid confirmed that the county had already confirmed the funding request from Golden Hills RC&D. She also cited that WCCA was only requesting an increase of $500, and motioned to proceed with approving the $3,500 total annual funding request, and it was approved.