Blays praised by Rainey at meeting 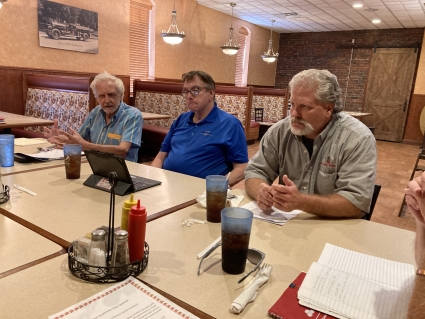 The Red Oak Downtown Urban Renewal Board met for its regular monthly meeting July 27.
DUR Chairman Roger Vial said two projects were under consideration for first round grant approval, the first being a new request from the Red Oak Elks Lodge #1304, in the amount of $872.
“They replaced the sewer line under their building and out of their building. My guess is that they had some sort of sewer line collapse. The total cost of the project was $3,490, and the work was completed by Jones Mechanical. I have all of the documentation,” Vial said.
The DUR Board approved the grant request for the Red Oak Elks Lodge. The other request was from the Red Oak Chamber and Industry Association for work to the second story apartment.
“I’ve got a bid from The Carpet Store for flooring the entire second level, at a cost of $8,890, with a grant request for $2,222. I would say that flooring is permanent in nature,” commented Vial.
Moving on to projects under consideration for final approval was 201 E. Reed St., owned by Bryant and John Blay. Vial said it was another project that had all documentation turned in.
“The initial project estimate was $17,500, and it was actually $18,194. A grant of 25% of that is $4,548. I have cancelled checks from Smith Electric, Dave’s Total Concrete, and Justin Miner. The project is complete as of today,” explained Vial.
Board Member Audie Rainey praised the efforts of the Blays on the completion of the project.
“This project is a great example of how this money is used. The project turned out very nice, and it really transitioned from a simple shop to a nice building. I’m impressed with what it looks like and what they’ve done,” commented Rainey.
The DUR Board approved final round approval for the project at 201 E. Reed St, as well as the projects at the Elks Lodge and the Red Oak Chamber and Industry Association.
The board took no action on 317 E. Reed St., Mark Jackson’s Red Oak Hardware Hank and Hallmark Gold Crown, to replace windows. Board Member Ann Carder said they were still waiting on materials.
“It is a supply chain issue. We can‘t get the windows, and until they get the windows in they can’t give us a firm price on them, so that’s where we are at the moment,” advised Carder.
The DUR Board also took no action on 204 E. Reed St., Davis-Taylor Insurance, to replace the roof. No new information was received.
The DUR Board then approved the requests for funding for the Blay’s project at 201 E. Reed Street and the Elks Lodge. No action was taken on the ROCIA project as they had not yet submitted a cancelled check to show the work had been completed.
The DUR board also held a discussion with Randall Wilson, who is assisting in efforts to update the City of Red Oak’s website, and approved updated information to include on the DUR page when the website is updated.